Great Is the Art of Beginning

The beginning is the most important part of a book. It needs to captivate the reader, make them want to know more, go forward, find out. I’ve fallen into the habit of picking up an interesting-looking book at the bookstore and, instead of reading the blurb, turning to the first page. If there is a prologue, I will also see how the first actually chapter begins.

Sometimes it works, sometimes it doesn’t. In any case, I thought I would gather here some great beginnings of books I have read (and own, since quoting becomes harder when you don’t have the material at hand). Some are just the first sentence, some the first paragraph. Some are from prologues, some from first chapters.

“I am the Vampire Lestat. I’m immortal. More or less. The light of the sun, the sustained heat of an intense fire – these things might destroy me. But then again, they might not.”

“In the land of Ingary, where such things as seven-league boots and cloaks of invisibility really exist, it is quite a misfortune to be born the eldest of three. Everyone knows you are the one who will fail first, and worst, if the three of you set out to seek your fortunes.”

“Harry Potter was a highly unusual boy in many ways. For one thing, he hated the summer holidays more than any other time of year. For another, he really wanted to do his homework, but was forced to do it in secret, in the dead of night. And he also happened to be a wizard.”

“Contrary to whatever stories and songs there may be about the subject, there are only a handful of respectable things a man can do after he picks up a sword.”

“Ravens! Always the ravens. They settled on the gables of the church even before the injured became the dead.”

“As always, before the warmind and I shoot each other, I try to make small talk.”

–       The Quantum Thief by Hannu Rajaniemi

“At the height of the long wet summer of the Seventy-Seventh Year of Sendovani, the Thiefmaker of Camorr paid a sudden and unannounced visit to the Eyeless Priest at the Temple of Perelandro, desperately hoping to sell him the Lamora boy.”

“The game was Carousel Hazard, the stakes were roughly half of all the wealth they commanded in the entire world, and the plain truth was that Locke Lamora and Jean Tannen were getting beaten like a pair of dusty carpets.”

All of these are excellent books, and if any of the beginning appealed to you, I recommend from my heart that you read the book it is from.

I will return at the end of the month!

Hello, and sorry for being late!

School took over all of a sudden. I had to return a study diary, read Stephen Crane’s the Open Boat, get a book from the library and the a three-hour lecture followed by a movie. This blog completely slipped my mind, as I’m not in the habit of writing for it yet.

Without further ado, on to the books! 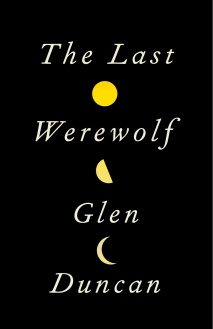 The Last Werewolf was the first book I’ve read by Glen Duncan. A friend linked it to me, and as it seemed interesting, I decided to give it a go. The title tells a lot: the main character is the last werewolf alive, since there is a sort of disease that prevents change in future victims. He is being hunted by the official forces, and takes it very stoically – until something happens to awaken his will to live.

It took me a while to warm up to the style. It’s not hard or heavy, but at times intricate and crowded with literary references. (What really attracted me to this book was an excerpt online that started “Reader, I ate him!”) The plot flows nicely – we see events through Jake’s eyes as he records them in is journal – and keeps surprising you. Jake is an interesting character. We find out about his background, and here lies one of my complaints: he received the curse in the 19th century, but I can’t get the feeling of the era in the flashback sequences. The history and broodings of a monster remind me a lot of Anne Rice’s books, sometimes of Louis in Interview with the Vampire and sometimes Lestat in the Vampire Lestat. Not that this is a bad thing, as I like both of those books.

I couldn’t restrain myself any longer: I had to reread Ellen Kushner and Delia Sherman’s the Fall of the Kings. The book takes place in Riverside, the place established in Kushner’s Swodrspoint, although this one happens several decades later.

Basil St Cloud is Doctor of History at the University, and keen to prove that not only did wizards exist hundreds of years before but their magic was real. This is an outrageous view and the whole city talks about it. Basil’s students back him faithfully, as does his lover, Theron, a student of Rhetorics and, without Basil’s knowledge, the heir of the Tremontaine dutchy. Strange things start to happen, omens are in the air, Northmen come down south, and Basil finds a book.

The plot is a little hard to abbreviate, since there are several points of view: Basil, Theron, a student of Basil’s, and Lord Nicholas Galing, who is up to no good. The writing itself is enchanting, Riverside is very much alive, and the whiffs of magic and the traditional rituals of the North make the reader shiver. There is, as often in mannerpunk, a political dimension, which adds to the attraction.

It is a wonderful book. I do not like it as well as the other Riverside books, the aforementioned Swordspoint and the later published the Privilege of the Sword, but it definitely has its appeal. 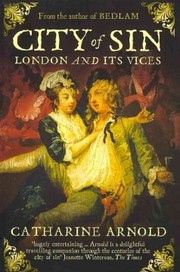 Catherine Arnold’s book City of Sin – London and its Vices take the reader through time but not place: it relates the history of prostitution and sex in London from the Roman times to the 21st century. It is definitely an interesting read. It shows how important part prostitution has played in people’s lives and how it has survived despite the laws set to prevent it. It gives us such aspects of sexuality as pornography, homosexuality, escort girls and even art.

The balance of this book is slightly off, as always happens when a topic is examined during such a lengthy period of time. It is heavy on the Victorian, which of course is because there are many more records from that period than, say, the Tudor era. Regency period is a little neglected, but that seems to be a common problem when we’re discussing vice.

Overall I recommend this book as a background read for writers and for anyone who has an interest in these matters.

I was not supposed to borrow anything from the library before I’ve read everything I brought back home from London, but after a particularly nasty day at school I decided I deserved a little treat. Back from the library is brought Georgette Heyer’s These Old Shades. It is the first book in the Alastair series, telling us how Justin Alastair, Duke of Avon, meets his wife. I will not say anything particular about the plot, and recommend not reading the blurb if you wish to be surprised. What I can tell is that it has many typical elements of Regency Romance: revenge, a kidnap, a chase, society and, in this book very charmingly, France and the court at Versailles.

I did not like this book as much as I enjoyed its sequel, the Devil’s Cub. This is an early work of Heyer’s and I don’t think her style was very refined yet. It is fairly charming, however, and a quick read. I have to recommend it despite the shortcomings I find in it, for it shares some characters with the much better Devil’s Cub and thus makes the latter easy to understand.

I’m starting a course on History of Literature, from the middle ages to the Romanticism, and one of the books required was Dante Alighieri’s Inferno, which is the first part of the Divine Comedy. It was surprisingly easy to read, thanks to Eino Leino’s excellent translation. For those who are unfamiliar with this classic work: the main character goes through the different layers of Hell guided by Vergil and meets people from each layer, telling him what they have done to deserve their fate. In the first layers the punishments are relatively mild, but the deeper we go, the more gruesome it gets.

What can I say? This is a classic work, and not without a reason. One has to be vigilant, though, because there are references to people who were certainly known to the contemporary Italians but might not ring a bell for a modern reader. Often the crime is not explicitly stated and only the criminal’s identity is revealed. Having a map of Dante’s Hell helps a lot.

Written: the whole Divine Comedy sometime between 1308 and 1321

Pages: 206 (not counting pages with pictures)

So that is all for October. I’m currently reading Dan Abnett’s Triumff – Her Majesty’s Hero and have Cervantes’s Don Quixote part one waiting. The latter is required reading again, and its size took me by surprise – I’m hoping it isn’t the whole 600 pages I’m supposed to read.

I have also bought books: the Gollancz 50 collection’s edition of the Lies of Locke Lamora and Hannu Rajaniemi’s the Quantum Thief, which I got from this year’s Book Expo, where Mr Rajaniemi was speaking. I got the book signed, hooray!

Until the end of this month, now!